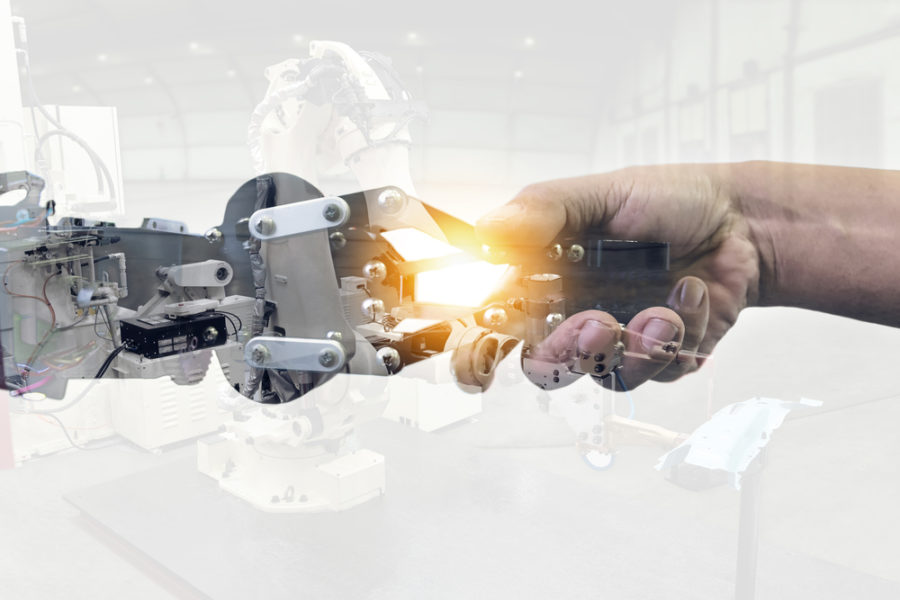 The train has not left yet

Industry 4.0 - combined with German production know-how - offers great opportunities for our economy. Due to the flexible production, we can create customization for everyone at a reasonable price and can stand up to Asian mass production.

In a nutshell, industry 4.0 means: Everything gets smarter. Precise preplanning is now replaced by flexible, smarter production. While up to now exactly planned and programmed, which machine takes over which task in a production line, this advance planning is replaced by industry 4.0: Machines communicate directly with each other. For example, the product Auto knows what color it should receive - and can tell the painting machines. It no longer needs to be determined beforehand that a certain number of pieces should now be sprayed in one color. In addition, a single robot can respond to bottlenecks on the assembly line and integrate itself into the production chain and take over tasks without having previously been programmed precisely.

The big opportunity for Germany

There is a great opportunity for Germany in these changes: No one knows as well as we do how to produce successfully worldwide. Creating this knowledge with the digital world creates a lot of potential. The train has not left for Germany yet, but action must now be taken. The German middle class threatens to oversleep this development. With a combination of our production know-how and 4.0 industry, Germany could confidently face mass production from Asia.

Just got really started, this is namely already doomed again. Thanks to the 4.0 industry, the desire for individualization for the masses can be met in the future. Through flexible production, individual products can be offered at reasonable prices. For example, with the implementation of Industrie 4.0, everyone will be able to produce an individualized shoe with an adapted footbed in the next few years. Because in the industry 4.0 it is unimportant for the robot, whether he makes only the same shoes or different.

We can not just be manufacturers

With all the focus on products "Made in Germany", we must not lose sight of Smart Services. For Germany as export world champion there is the danger to degenerate to the mere manufacturer. Cooperations such as those of VW and Google carry the risk that in this case VW will deliver only the body in further development. In the perception of users, the manufacturer but plays less and less a role. Just as it is important for smartphones today, whether you use iOS or Android, it will not matter in cars, who supplies the body. If in doubt, it means that you drive the Google car. The development to enrich products with services, therefore, must not pass us!

This website uses cookies to give you the most relevant experience by remembering your preferences and repeating visits. By clicking on "Accept" you agree to the use of ALL cookies.
SettingsAccept
Manage consents

This website uses cookies to improve your experience as you navigate through the website. Out of these, the cookies that are categorized as necessary are stored on your browser as they are essential for the working of basic functionalities of the website. We also use third-party cookies to help us analyze and understand how you use this website. These cookies are only stored in your browser with your consent. You also have the option to refuse these cookies. However, opting out of some of these cookies may have an effect on your browsing experience.
Necessary cookies always active
Necessary cookies are absolutely essential for the website to function properly. These cookies guarantee basic functionalities and security features of the website anonymously.
Analytics
Analytical cookies are used to understand how visitors interact with the website. These cookies help provide information on metrics such as number of visitors, bounce rate, etc
Other
Other non-categorized cookies are those that are analyzed and have not yet been placed in a category.
Show
Advertising cookies are used to provide visitors with relevant ads and marketing campaigns. These cookies track visitors across websites and collect information to provide customized ads.
SAVE & ACCEPT
Supported by